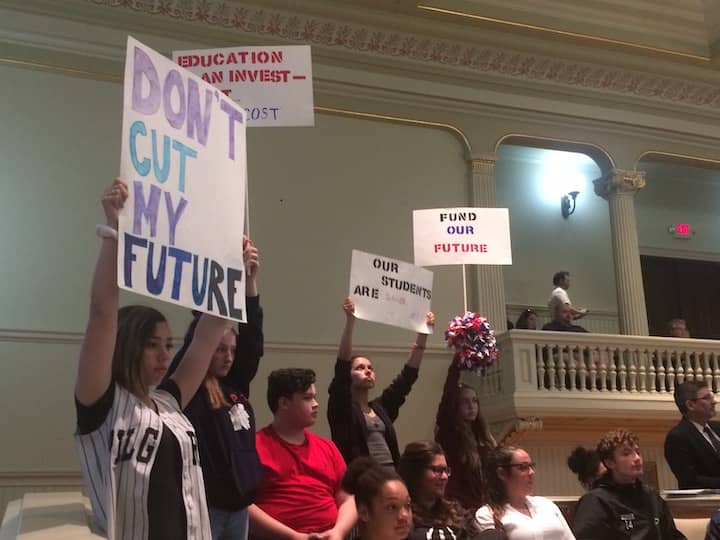 Few vacant seats remained at 7 p.m. inside Council Chambers, with seating on typically empty benches along the sides of the room also peopled by members of the public, and students milled in and out of the room.

The Finance Committee was still in session at 7 p.m., and young voices in the crowd groaned as councilors called people to the podium to answer questions from  West Bay Community Health and the Interlocal Trust on providing health care to City employees.

Councilman Ed Ladouceur pounded his gavel numerous times to bring order to the room on multiple occasions. “We’re going to be here until till twelve,” he said, noting that the body had to stick to the agenda, a legal requirement under the state Open Meetings Act.

Ladouceur’s gavel was answered by foot stomping, and a small chorus of voices replied to his statement about staying on the agenda, asking, “Why?”

During public comments on the budget, a student asked the Council to stop asking the insurance company representatives the same questions.

Councilwoman Donna Travis told the students they were being used by school officials, and that the decision to cut sports, whether or not the Council awarded the funding school officials asked for, rested with the School Committee, all of whom were attending the meeting.

“The sad part is, they’re using you kids as pawns,” Travis said.

Councilman Timothy Howe praised the students for addressing their concerns in a public forum, but took issue with school officials he said had informed the students enough to show up to the meeting angry, but not enough to know that despite their protest, the City Council was bound to follow the agenda.

“They know that. They know how the government works. They left that out,” Howe said.

Howe addressed the school budget, saying that the school department has budgeting challenges that can’t be solved with more funding.

“You don’t get anywhere by throwing more money at it,” Howe said, “They need to figure that out.”

As the Finance Committee opened the issue of a resolution asking the School Committee to restore summer school for seniors to public comment, Madison Clark, a Toll Gate High School student, told them sports is keeping many students out of summer school. Many students work harder on their studies to make sure they can meet the academic requirements imposed on athletes, she said.

“Cutting sports is going to put more kids into summer school. Which is going to cost more money,” Clark said.

NOW, CHECK OUT THIS:
Gallo Bill Would Allow District Field Trip Funding
Merolla referred to earlier budget hearings, “We just identified about a $1.2 million savings for them, so what’s the problem?” he said.

Jacob Midoro asked why the City Council spent so much time focused on the School Department’s pension payments, and little time on the current year’s school budget.

“Why didn’t you ask questions about that $7.7 million? Where does the rest of the money come from?” he asked.

During a break in the hearing, students Adam Rega and Daniel Tanguay spoke with Ladouceur about the budget and the Council’s mistrust of the School Department.

Tanguay said his takeaway from the meeting and his discussion with Ladouceur was, “That there should be less back and forth,” between the two bodies.

The Finance Committee ended its hearing at about 10:30 p.m., and the full Council meeting had yet to start, with the Public Safety Committee still in session at 11 p.m.