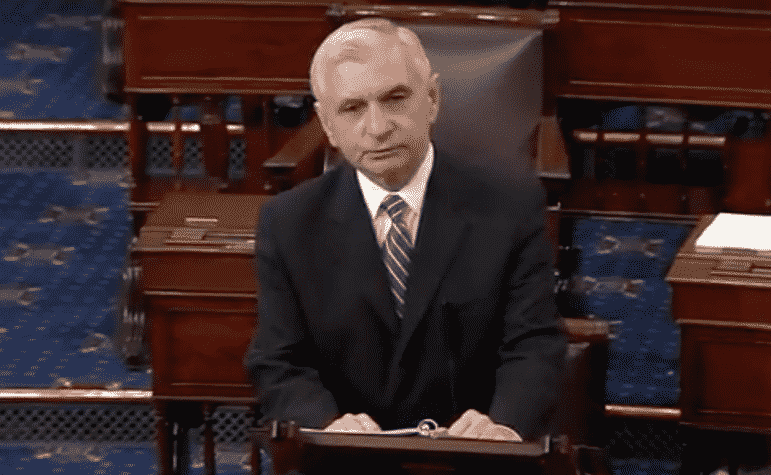 According to a 2018 report by the Center for American Progress, which evaluated the security preparedness of all 50 state election systems, most state election systems remain vulnerable to hacking and foreign interference.  Rhode Island scored above the national average, getting a B rating in the report.  Not a single state received an “A” rating.  In addition to Rhode Island, ten other states received a B, 23 states got a C, 12 states received a D, and five states were given an F.

Speaking on the floor of the U.S. Senate, Reed highlighted the national security need for Congress to pass his amendment with Senator Leahy to provide an additional $250 million in State Election Security Grants:

“It is difficult to overstate the need to shore up support for democratic institutions here and around the world in light of President Trump’s recent foreign policy failures.

In the last week or so, the President has attempted to derail the NATO summit by insulting our allies and demanding that they immediately double their contributions, thrown a wrench into Brexit negotiations, and seemingly endorsed a new Prime Minister for the United Kingdom and then embraced Russian President Vladimir Putin in Helsinki.

President Trump stood shoulder to shoulder with President Putin while the world looked on and he chose to take the word of an autocrat and KGB agent over the assessments of the American intelligence community on Russia’s interference in our elections.

By indulging President Putin’s fabrications, he also gave credence to Putin’s propaganda on Crimea and Syria, Russia’s use of chemical agents against civilians, and its violation of arms control obligations.

This failure to stand up for America’s interests and those of our allies and partners was a dereliction of the president’s responsibilities that will continue to undermine our national security.

President Trump’s erratic and divisive actions are undermining that which makes us strong. Our nation and our allies, our partners around the world benefit from the world order that the United States created after World War II.

We draw strength from our allies and from participation in international institutions.  We are not weakened by them.  We are strengthened by them.

While the President later took low-energy steps to walk back and obfuscate his words on Russian interference, he soon took to Twitter again to aggressively attempt to discredit investigations into Russian election interference and into his own campaign.

Regardless of what President Trump may say or tweet, we must be absolutely clear — the threat of Russian interference in our democracy is not a hoax or a witch hunt, and Congress and the states must act now to address the real threat of another foreign intrusion into our elections.

Indeed, the findings of the intelligence community assessment were clear, and I quote, “[w]e assess Russian President Vladimir Putin ordered an influence campaign in 2016 aimed at the US presidential election. Russia’s goals were to undermine public faith in the US democratic process, denigrate Secretary Clinton, and harm her electability and potential presidency.”

This problem is not behind us. Indeed, President Trump should listen to the national security officials that he appointed and a Republican-controlled Senate confirmed. The Director of National Intelligence, former Republican Senator Dan Coates issued multiple public warnings this month that “the warning signs are there” and “blinking red again” when it comes to Russian cyberattacks on the United States midterm elections. Last week, FBI Director Christopher Wray stated “Russia attempted to interfere with the last election and . . . continues to engage in malign influence operations to this day.” When asked last week if Russia is still targeting the United States. DHS Secretary Kirstjen Nielsen said that the US ‘would be foolish to think [the Russians] are not. They have the capability. They have the will. We’ve got to be prepared.’

The private sector also validates these concerns.  At last week’s Aspen Security Forum panel, Tom Burt – Microsoft’s Vice President of Customer Security and Trust – told an audience that Microsoft already has detected cyberattacks against three candidates running for Congress this fall.  These attacks looked very much like those phishing attacks that Russian agents used against Democrats in 2016.

So this chamber faces a stark choice:

We can listen to the American intelligence community, nonpartisan experts; we can acknowledge the indictments and guilty pleas of 33 people by the special counsel and the ongoing warnings of Republican-appointed national security officials, all of whom agree that our democracy is under attack; or we can trust the words of Vladimir Putin, online trolls, and conspiracy theorists, and President Trump, who insists in the face of evidence that Russia is not attacking our democracy.

For my part, I don’t believe that’s a very difficult choice.

Mr. President, securing our elections should not be a partisan issue.  Election security is national security.  The states need our help to defend our elections against these attacks.”