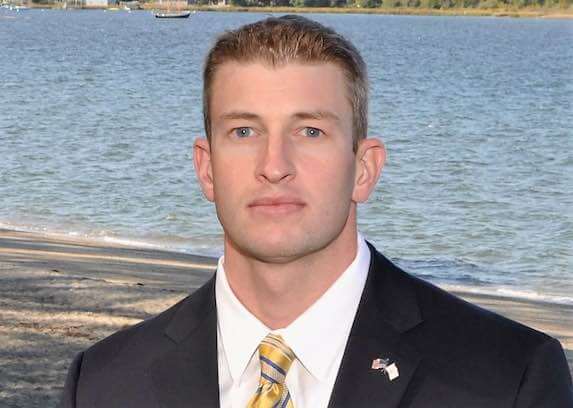 WARWICK, RI — Evan Shanley, 30, of Viceroy Road, life-long Warwick resident and attorney with the Gursky Weins law firm since 2013, is seeking to represent Warwick Dist. 24 seat in the General Assembly to make it a better place to live and raise a family, and to be a voice for working families.

Shanley credits his family with teaching him the meaning of hard work, including his dad, Paul Shanley, a Warwick police officer for 26 years, stepmom, Patti Shanley, a Warwick teacher for 20 years, and mom, Mary Madden, the former president of the Trudeau Center.

Early this year, the Warwick native announced his candidacy against incumbent Joseph Trillo, who had not faced a Democratic challenger since 2003. Trillo has since dropped out of the race. Republican candidate Stacia Hulyer, on the heels of an unsuccessful 2014 primary bid for the Republican mayoral nomination, is his present opponent. Neither faced challengers during the September primary election.

Shanley has also earned the endorsement of Clean Water Action.

Warwick Post has presented each Dist. 24 candidate with the same series of questions for voters’ benefit in the days leading up to the election. Here are Shanley’s answers:

Please explain why you’re running for the Dist. 24 Rep. seat – What do you feel you can bring to the office that’s lacking there now?

I’m running for State Representative because Warwick is my home and I care about what happens here. I’ve lived in Warwick just about all my life.  I’m a third generation resident of the community.  My friends and family are here.  My good name and reputation are being built here.  I’ve committed to our community by purchasing a home here, and my wife and I are expecting our first child in December. I’ve made a lifelong investment in this community, and I will not sell out and I will not let my neighbors down.

3) What is your opinion on the long wait voters endured to view the Ragosta Report? Would you change anything about state Open Record Law practices?

The student and parent complaints detailed in Ragosta’s investigation and report to the School Committee were mishandled by administrators from day one, and democracy doesn’t work if voters are kept in the dark about official misfeasance.  That’s why it was important to release the report promptly.

That being said, part of the problem is that the School Committee directed Mr. Ragosta to present his report informally – just speaking to the Committee – instead of in a formal written report.  As a result, Mr. Ragosta’s testimony included confidential information about students, and that meant the School Committee could argue confidentiality and point to federal law protecting student records.  What they should have done is require a written report that preserved student privacy while promptly informing the public about what had transpired.

I would not change the Open Records Law itself, but I would hope that people continue to hold officials to the letter and spirit of the law.

After reading the Ragosta Report:  What lessons do you see the School District, and citizens, should have learned about the power entrusted to its administrators and the ability of concerned parents and staffers to safely speak out?

It is clear that the previous administration was entrusted with more power than it could handle. Parents, teachers and staffers must be allowed to safely speak out and all allegations of misconduct must be investigated and taken seriously.

Are you in favor of the tolling plan to fund the Rhodeworks infrastructure initiative? Please explain why. I strongly support the RhodeWorks program. Our roads and bridges are among the worst in the nation and are in desperate need of repair.  The bridges on some roads, like the 6-10 connector, are flat out dangerous.  With RhodeWorks we are fixing our bridges and roads, some of the worst in the country, without raising taxes.  I was not a fan of the tolling component and I still have concerns, but we can’t tax or borrow our way out of this problem and it’s reasonable to charge the heaviest users for the damage they cause. I strongly support the provision of the bill which prohibits extending tolls to cars without statewide voter approval and I personally would not support an extension to cars.

Please share something you would do to improve education in the state.  I attended Warwick public schools from kindergarten through High School – Cedar Hill, Winman and Toll Gate – and I received a great education.  I made lifelong friends, participated in sports, and had some terrific teachers.  So I know that public education can work and work well.  Unfortunately, in recent years, the great work teachers do has been overshadowed by dysfunction at the administrative level.  Parents want to be involved, but as the school consolidations over the past two years have shown, administrators don’t seem to want to include parents in decision-making. Parents and teachers feel that their opinions and concerns are being ignored and their questions are not being answered adequately. It’s easier said than done, but all parties need to put aside their personal differences and start working together to face these problems.

Students, teachers and parents should have clean, safe, state of the art public schools, but what they more frequently encounter are deteriorating, unsafe, inadequately staffed facilities. We need to upgrade and renovate our schools.  That costs money, but we can’t tax our way out of the problem.  I would support encouraging communities to consolidate municipal services. And I would support increasing school aid in the State budget where possible by eliminating wasteful spending.

Personally, my wife and I are expecting our first child in December.  I have a vested interest in making sure she (or he) has the best education possible, and like any parent I won’t settle for anything less.

7) Do you feel Warwick is getting a good enough deal from RIAC in return for hosting the airport?

Compensation from state agencies and non-profits in Warwick is an important issue that we should continually reexamine. Hosting the airport obviously has costs to taxpayers, but it also has benefits, like the tax revenue from businesses that rely on airport visitors. I’d agree the City should examine the costs and benefits of hosting the airport, and renegotiate if we’re not getting a fair deal.

Please share your thoughts on any other pressing issues you’d like to address as part of your campaign.

Like just about everyone else, I’m tired of the parade of lawmakers violating ethical rules.  Whether it’s self-dealing, phony voting residences, or simple dishonesty to the public, we need to change the culture on Smith Hill.  That’s a big reason why I’m running.  So first, we need to vote yes on Question 2 to restore Ethics Commission oversight at the General Assembly.   But we need to do more.  I support greater transparency on ethics reports and better enforcement of campaign finance spending laws.

I’m also extremely concerned about preserving Narragansett Bay. We need to keep our waters open for fisherman and our beaches open for swimmers. Warwick has major issues with our storm water management systems and I will fight for stronger protections at the State House.